Technically we are the proud tenders of an allotment and a vegetable garden.  We almost lost the allotment last year due to the weeds outnumbering the plants in a staggering fashion.  Previously we had managed to convince ourselves that we were keeping an area of the plot "wild" to encourage friendly insects, but it had got out of hand.

Our plot is now being tended by a couple of Z's colleagues.  Next year R will be big enough to cause all kinds of mischief on the plot and we'll pick up our trowels again.  To keep us in the habit of eating our own we converted the front garden into a veg patch.  It is little more than 2m by 3m but last year it kept us in salad leaves and runner beans for the summer. This year we have managed to plant nothing.  All that we now have growing is the rekindled rocket and Swiss Chard that we planted this time last year.

The rocket has turned up in a few meals already but the chard has just come into its own.  I really love chard, it may well be my favourite vegetable.  Two veggies for the price of one.  The tender leaves that cook like spinach and the thick stems, which have a slightly beetrooty, earthy sweetness to them. 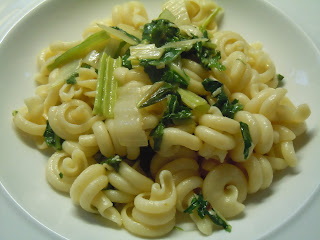 For tonight's menu I simply fried the stems in olive oil with some garlic, anchovies and dried chilli.  Once cooked, but still with a bite, I added some cooked pasta, the shredded leaves and a handful of parmesan and after a brief stir the meal was cooked and served.  As quick evening meals go this is one of the tastiest.  Sadly, there isn't much chard in the garden, but we'll eke it out to make sure we can have some again this year.
Posted by Ewan Mitchell at 21:42