Tonight for the Olympic Food Challenge I am cooking the only recipe that I have tested in advance, Steak with Chimmichurri Sauce.  Argentina and steak go together like Wenlock and Mandeville.  Such is the affinity between grilled beef and Argentina that a large number of Argentinian Steak Houses have sprung up around the globe.  I've eaten in such restaurants in Leeds, London and Amsterdam and seen them in most of the cities that I have visited.


I love steak.  Before Z changed her mind about vegetarianism it was my go to meal if I was eating alone or in a restaurant.  These days we eat steak at home for celebration meals, but the addition of the Argentinian sauce, chimmichurri, really lifts the meal to another level.  Back in May I discovered that there are as many recipes for chimmichurri as there are fish in the sea.  I chose what I thought was a good looking, yet basic recipe and made copious notes while we were eating. 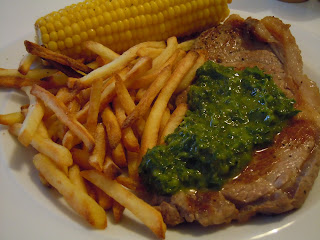 Tonight I followed the annotated and food splattered list to make my own version of this classic sauce.  It is really simple to make too.  Onion, garlic, parsley, oil, vinegar and oregano are put into a blender and blitzed until a sauce is formed.  Our house recipe has about twice as much parsley as any I have seen but it works really well against the raw onion and garlic.  We had skinny chips and corn on the cob with our steak and settled down to watch the opening ceremony.  It looks like the Olympics have arrived.
Posted by Ewan Mitchell at 11:05