Back in 2013 I wrote what was meant to be the start of the end of my food bloging adventure.  I had planned on cooking and writing some last supper type meals and slowly wind down TM from the once daily blog to something I could occasionally dip into.  It turns out that what I had done was given myself permission to drop the blog like a hot potato.

There has been a lot of eating in the past six months and quite a lot of the dishes were the type that I had intended to write about.  Along with the things that folk would consider to be standard fare, rabbit has featured a number of times, as have a number of dishes using offal, and a great squid curry.  It is these dishes that have stayed in my mind, the ones using unusual ingredients.

Now I don't make New Years resolutions, but I am determined to eat a more varied selection of food in 2015.  We are lucky in Leeds that we have a glorious market.  I know that the building itself has seen better days, but the stalls and the people who run them are wonderful and well worth using.  We also have some great local shops that I fully intend making more use of.

Tonight's Menu comes courtesy of a couple of my locals.  Having gorged ourselves over the Christmas Holidays we decided that we needed to up our vegetable intake.  Our festive Market Delivered fruit box had provided us with a pomegranate that needed using and a tajine was born. 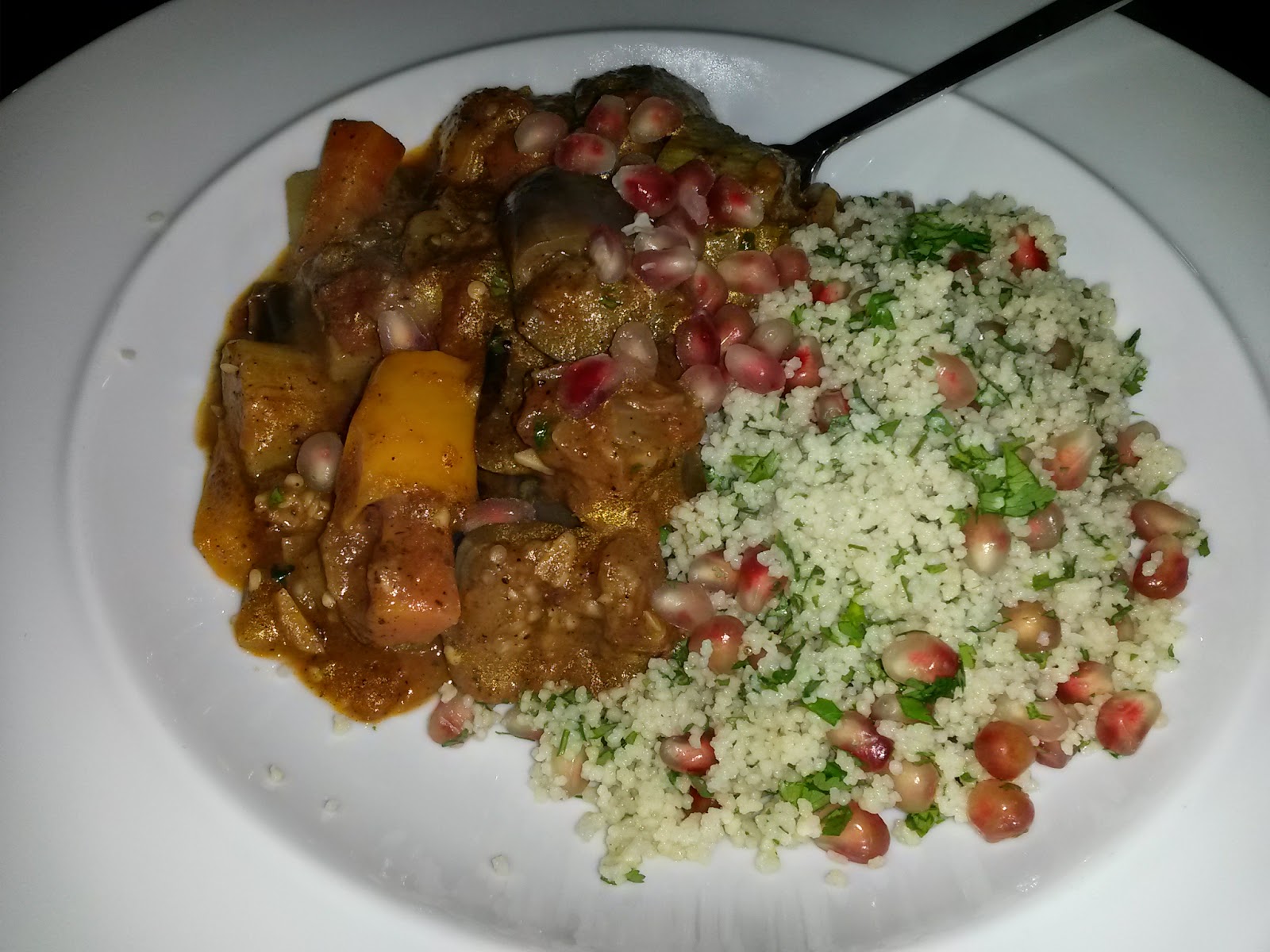 Aubergines, courgettes, peppers, carrots, onions, and garlic were simmered in a tin of tomatoes and stock with a couple of tablespoons of Ras El Hanout.  After an hour and a half delicious, rich, wintery stew was ready, all that was left to do was to make some couscous flavoured with coriander, parsley and some of the pomegranate seeds.

I also added some preserved lemons and some grape molasses to the stew but only because I happened to have them at the back of the fridge.  This is the healthiest meal that I have eaten all year and probably the healthiest I've had in the last three weeks and one I will do again.  For the record, I really don't see the point in aubergines but having found some interesting varieties locally I decided that they count as something that I don't normally eat.

I will try to keep you updated as I try to vary my diet during 2015 and I'd love to hear of any unusual foods you find, or if there is anything that you wouldn't eat that I could try to change your mind on.
Posted by Ewan Mitchell at 21:49