Over the course of writing Tonight's Menu, I have managed to coerce quite a few people to give up their time and blogs, to take part in my hair-brained schemes and challenges.  When the opportunity to help a fellow food-blogger by taking part in their challenge arose I felt honour bound to offer my time and blog.

Meat Free March is exactly as it sounds, a whole month without a meaty morsel passing your lips.  I'm a card carrying carnivore and quite often sneak extra meat into vegetarian recipes* so I couldn't have signed up for the whole month. I don't know if it was Becs, from Bits and Bobs Becs, or Fay, from Food Fables, who came up with the idea of not eating meat, but I think I'm right** in saying that as we get towards the end of March their resistance to the call of bacon has stated to wane.

The Meat Free March Recipe Swap is not only a way for bloggers to come together and share ideas, it is also a good chance for Becs and Fay to get inspiration for the final push towards April and the promise of a juicy steak.  I am of course assuming that neither of them are have been converted to a life of vegetables.

Last week I spent hours trawling the internet and thumbing through cookery books to find that one elusive meat free recipe I wanted to share, and could act as inspiration to Becs and Fay.  I even went back through my blog posts on here to see if there was anything in particular that I thought somebody might want to cook.  That was when I received the email with my recipe swap partner's details.  I had another challenge, my swapee was vegan.

I went back through the books and bookmarked websites and, without fail, every recipe I had chosen had cheese, cream or eggs as an ingredient.  A second, more directed search and I was back on track.  As per the rules of engagement I posted my chosen recipe along with a couple of choice ingredients and sat back to await the arrival of my mystery package.

I didn't have to wait for long.  The recipe I received was for Dirty John Quinoa which was an adapted recipe from Fresh from the Vegan Slow Cooker by Robin Robertson.  It was written out inside a cute owl greetings card and came complete with a bag of quinoa.  I've had quinoa in the past but had decided that it was just another grain and quite pricey, so I didn't get into the habit of buying it.  It is known as a super grain as it packs more protein than any other pulse which is why vegans love it.

My initial response to the recipe was not one filled with joy.  Firstly, I don't own a slow cooker.  I do however have a decent conventional cooker and some good pans.  Secondly the list of ingredients felt a bit miss-matched, but who am I to argue with Robin, she's written more vegetarian and vegan cookery books than I've had vegan meals.

Onions and garlic were fried off before a yellow pepper, 180g of quinoa, a pack of mushrooms, two tins of black eye beans, a tin of tomatoes, a dried chilli, smoked paprika, thyme and veg stock were all added to the pan to cook for a couple of hours.  Half way through cooking this was still not looking promising.  The earthy smells of the mushrooms and the beans were fighting against the smoked paprika and thyme. 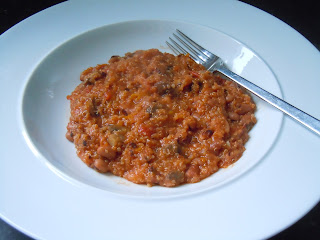 There was no turning back however, we had nothing else in and had invested too long on the meal.  I needn't have worried.  Through some bizarre alchemy the casserole came together and the flavours married.  Quinoa has a peculiar texture, still crunchy after two and a half hours cooking, but that worked against the softness of the rest of the vegetables.  There was also a pleasant heat from the chilli and paprika that even R didn't find too spicy.

I won't go into the mechanics of the recipe swap as you can find the full details on either of Becs' and Fay's blogs.  These two need applauding for their efforts in exploring vegetarian food and encouraging others to drop meat every now and then.  I hope my swap partner enjoyed the recipe that I sent to them.  I liked Dirty John but I don't think I'll be adding it to my repertoire any time soon.

*not if I'm serving the meal to vegetarians, I'm not that nasty.
**I have been known to be wrong and this could be one of those occasions.