A couple of weeks a go I was offered a FREE jar of jam made by The Chilli Jam Man.  All I had to do to receive the jam was to promise to eat it and write about the experience.  The first part of the deal was a cinch.  I went to Millies, who had made the offer of the jam, and picked up a jar.  I chose a jar of Ginger Chilli Jam and made sure that it was included in our meal plans for the week.  The second part of the deal was equally successful with the jam featuring only a couple of days after I had picked it up.  However, I found myself at a loss for words when it came to putting together this blog post.

The quality of the product wasn't the problem, neither was my cooking.  Yet for some reason I just couldn't get the words out.  I had decided to use the jam as a marinade of pork kebabs.  I found a couple of loin chops in the freezer, roughly chopped them and coated them in half of the jar for a few hours.  I threaded the meat, along with onions and peppers, on to bamboo skewers and grilled them.  Served with wild rice they made a great midweek meal. 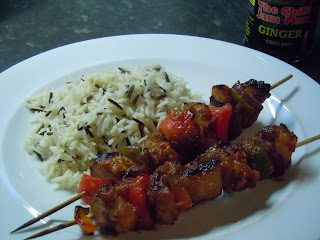 The kebabs were really nice.  The ginger really shone through the sweetness of the jam.  I would have preferred a more fiery kick but Z thought it was spot on.  I then sat down to write about them but I got stuck in a loop.  I found myself writing the kind of gushing blog post that I don't like, so I parked the blog and moved on.

What I needed to do was to use the jam again.  We had mused about other uses while we were tucking into the kebabs and the idea that had stuck in my mind was to use it in a sweet dish instead of a savoury one, it is jam after all.  Chocolate and chilli are such a good combination I decided to break with tradition for Tonight's Menu and bake a cake.

Z is the baker in our house*.  Other than a massive batch of cupcakes a couple of years ago for charity I am a cake novice.  I have seen Great British Bake Off on the telly and I know that baking is more of a science than my usual cooking style so I needed a fool proof recipe.  I was about to trawl the internet but the first chocolate cake recipe that popped up was one of Mary Berry's.  As Mary is the queen of cake, I assumed that nothing could go wrong.  I followed the recipe to the letter, I even managed to find two matching cake tins which were the specified size.  However, it's fair to say my cakes' uneven rise and almost burnt sides lead me to believe that I wouldn't be master baker of the week. 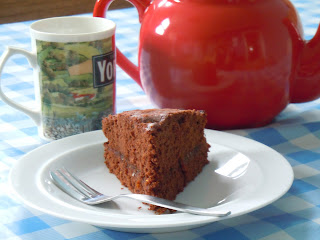 That said, this cake was baked for flavour and not looks.  By the time I had sandwiched the two cakes together, using the rest of the chilli jam as the filling, we had a glorious chocolate cake.  This time around the heat levels were perfect against the sweet richness of the cake.  I was going to take the cake into work to share with my colleagues as I don't have a sweet tooth, but I couldn't part with it.

The Chilli Jam Man does make a cracking range of versatile jams and chutneys and great pickled onions.  Most of his range can be bought in Millies, who also stock a load of other interesting chilli products including this great looking gift hamper.  Thanks to Millies for the free jam, I'm off to eat some more cake.

*other than bread
Posted by Ewan Mitchell at 21:00